This year I realized something big y’all.

As you may not know, I currently live in a house with three 25 year old white guys from very white states.  I’ve been experiencing a sort of culture shock.  Being from New York, it’s not that white people haven’t been in my life.  But the difference between the white people there and those where I now live is their level of experience with people of color.  I’ve never really been around people like that and it tripped me out.

There are some big things black people know, that to my surprise white people don’t.   Let me set it up real quick.

This was such a crazy revelation to me.  I told my black friends about being told I had to wear a wig for an interview and their response was girllllllll.  I told my white roommates and they almost didn’t even believe me!  They didn’t believe those types of things still happened, even though they never really stopped and happen everyday B.

No shade, but I think that white people are the only people who don’t notice the existence of racial issues and/or their extremity in such large numbers.  Not to say that every other race agrees/believes/wants to change anything.  But I can walk into a store and say “they play a lot of Asian/country/Indian/Hispanic/Black/White music”.  But white people will here all white music in a store and think its reflective of everyone.  There’s no issue.  They’ll see an all white campaign and may not immediately see anything wrong with it, or say “the models are from different countries”.  Please see my Globally Black post to explain how crazy that response is.

Case in point: at this point we’ve all heard about the Pepsi ad with Kendall Jenner.  Recap – Kendall leaves an assumed photoshoot, daps up a couple people of color protesting and gives a pepsi to on of a team of police officers for peace.  A play on acceptance, resistance and police brutality, etc.   Social media responded likeeeeeee: 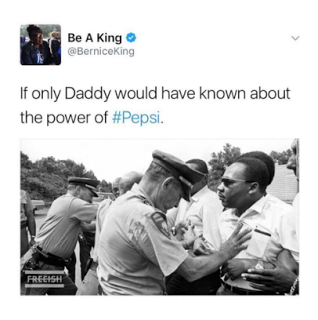 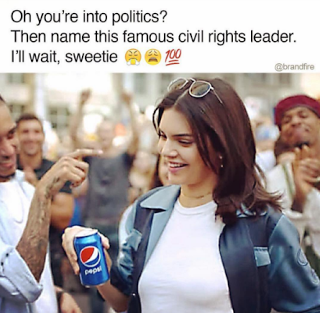 Lets not forget how many approvals this concept had to get before the release of this ad #rollseyes.

A lot of black common knowledge falls on deaf white ears.  This is why we’re still debating obvious issues like the documented history of police and their legal open season on black people.  With experts on the opposing side no less – smh.  Now I’m not all the way faulting white people for not knowing everything.  But we’re from the same country bruh, if enough people are telling you what’s going on and documented history compliments it… don’t argue with me.  YOU DON’T LIVE THIS LIFE.

So what does this mean?

This means that in order to promote our voice we have to talk to white people and tell them whats going on in the efficient and effective way you see fit.  Many don’t really understand the details of what’s going on, and their culture + history don’t give them anything to relate to our experiences.  I’m sure its also hard for some to even accept the extent of what their ancestors have done and what their people are doing.  The numbers of white on white crime are higher than any other race, especially because they make up the majority of the nation.  When all you see is reports on black crime and black people in jail its hard for them to see themselves in the mirror.  They don’t realize the protection that allows to them and theirs.  They don’t understand that there’s a positive connotation to all the pride flags on every restaurant, but a negative one for black lives matter flags and why.  It’s not their everyday B.

I know it’s going to be hard.  It was hard for me to realize that this is something I’m going to have to do.  I aint gun lie… I hold a lot of resentment+.

Can y’all let me know how your experience goes?

One thought on “The Things White People Really Don’t Know”

Alive while black. View all posts by blackatitblog